I took time last night to read through the Twitter conversation threads of author, Kola Boof and pop singer, Dencia when I heard they had a tweet fight. That was because I didn’t get how Jesus came into the matter of Dencia selling bleaching cream.

As I read down Kola’s thread, I discovered trouble started when she stated her displeasure about Africans losing their identity through the “white man’s religion” and worshipping a “white Jesus”. Then she mentioned that Camerounian-Nigerian pop singer, Dencia was selling “a product called WHITELICIOUS to other Nigerians who want to be White….like Jesus.”

I’ll just post their tweet fight. After that, I’ll talk about the issues raised because sadly embedded in those indecently presented opinions, are some truths I’d like us to talk about. This was the exchange between the two women…

This is how I see Dencia. She’s a hustler, period. I mean, it’s not like she’s an exceptional talent or that she makes hard-to-resist music. The problem is, I know this because I’m a mature woman but girls in their teens, early 20s and even 30s may find it very difficult to reason like me or even see it my way. And it’s the impressionable minds of these young women I’m bothered about.

I must confess, I had a brief romance with skin lightening creams. It started when I was in secondary (high) school. I had this horrible skin disease at the back of my legs. I don’t know how I got it but I remember it was one day I went into a bush to empty my classroom trash and I got allergic to something in that bush. My flesh kept rotting before my eyes and would drip liquid. I was given the strongest antibiotics but nothing worked, until an aunt took my mum and I to one of those Yoruba herb sellers at Igbudu market, Warri.

The rotten flesh was scraped raw and a very rough powdery substance was massaged into the raw wound. On a scale of 1-10 the pain factor was 9.5. And the scraping was done everyday until that spot bled! I was also given a herbal concoction to drink three times a day. Finally the disease died from the inside and dried up. But it left very horrible scars from all the scraping and the flesh-eating. I couldn’t wear shorts or mini skirts. I was permanently on trousers and maxi dresses.

Then another aunt suggested to my mum to use steroid creams on the dark spot. I remember, she mixed Symba cream with Betnovate-N cream. It worked like magic. All the scars and blotchy spots were gone and it left a creamy brown youthful skin in it’s place. Then I applied it on my face because I was having an embarrassing breakout of pimples. That cleared too and my face was so smooth, my skin glowed and with all the compliments pouring in, I couldn’t imagine going back to being that pimply-faced teenager ever again.

The problem with using these type of creams is that it becomes ADDICTIVE. You just don’t know when to stop. The skin on my thighs are naturally very light, compared to the complexion on my face and hands which are constantly exposed to the harsh African sun. So I told myself I was ‘evening my skin tone,’ which is the common excuse we African women use in lightening our skin. And so I experimented a lot on different lightening creams and soaps.

I speak for myself of course when I say wanting to look like a white woman or erasing my African identity WAS NOT my reason for using these creams. I was young, I was vain and I just liked what I saw each time I looked in the mirror. I loved the fact that it kept the pimples, spots and scars from mosquito bites away and I certainly loved the compliments from the guys and even girls too. I was totally ignorant to the side effects and since my skin lightening wasn’t near extreme, I just didn’t see it as an issue. I also know that these reasons I’ve stated for using bleaching creams hold true for most young women who were raised in Nigeria. It has nothing to do with wanting to look like white people.

While I may not outright condemn using such creams to get rid of dark ashy knees and elbows, I do however have a HUGE problem with using bleaching creams the way Dencia does. I really fear for the side effects such as skin cancer, premature aging, skin burns and hypersensitivity to environmental elements. Dencia doesn’t care about these theories I’ve mentioned. She said so herself when she tweeted:

“S/0  [Shout Out] to everyone supporting whitenicious & [Shout Out] s/0 to those indirectly supporting but thinking they’re hating with PHD worthy Essays. #FreePress“ 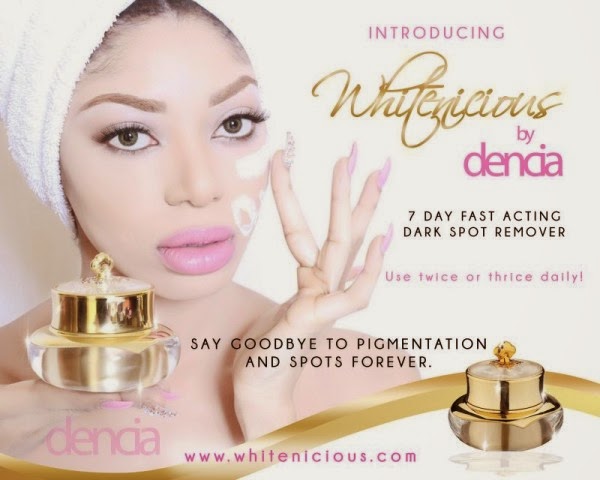 While Dencia may argue that her cream is targeted at dark spots and pigmented skin, we all know that they are some customers who’ll use it for general skin lightening simply because they want to look like Dencia or like I explained earlier because it can be addictive.

Bleaching your skin to the extent that it becomes so pale that I can’t even relate that skin tone to any particular ‘white’ race is so WRONG. If you look closely at the Asians from India, Bangladesh and Pakistan; you’ll discover that they have this creamy olive ‘yellow’ skin…which is lovely. The other Oriental Asians like Chinese, Japanese and Koreans have a nice curry-coloured ‘yellow’ skin. So do the Latinos and Arabs. They all have a nice tan to their whiteness. Their ‘yellowness’  looks nothing like the unnatural complexion extreme bleaching gives.

The issue of erasing one’s identity isn’t just a Nigerian or African problem. It is a global menace. You find Asian women…mostly South Korean and Japanese women…doing cosmetic surgery to widen their eyes and make their noses pointier because they crave the western look. These surgeries totally alter their traditional looks. Now I look at some Asian women and find it difficult to know where they come from or if they have multiple ethnicity.

Everyday, people get busy trying to alter their looks. Whites getting a tan, curly haired people straightening their har, Kinky-haired women wearing Asian or Latino textured weaves and wigs. People adopting cultures and practices of other races. Whatever we do, we shouldn’t forget who we are and where we come from. We can experiment with fashion and trends but not extreme, life altering practices which endanger our health.

I do not get what the fuss is about which race is more superior to the other because I’m so proud to be African. Again, being raised in Nigeria has helped me build such confidence in who I am because I understand that some blacks who grew up in multi-racial societies find it difficult to feel such confidence.

In as much as I detest how the white man ravaged our continent; taking my brothers and sisters as slaves and stealing our treasures, I must also say that the coming of the white man also brought in some light to an otherwise dark continent. For instance, in the part of West Africa where I come from, we had very evil practices…

But truth be told, I do not see Black, White or Asian. I see people. Good people and evil people. A good person can come from any race; likewise an evil person. Thinking that your race is superior to another is just plain ignorance in my opinion. And telling yourself that you’re inferior because you come from a particular race makes you a SLAVE. And that my dear is the worst kind of slavery…SELF ENSLAVEMENT.

Does it really matter what complexion Jesus was? Even kids these days know that Jesus was born as a native of Israel. He came from the Semitic race. And no pure blood Semite has blond hair and blue eyes. We all know that the image of Jesus as we see it today, was purely an artist’s impression of what he may have looked like.

Why don’t we bother about the lessons Jesus taught while on Earth? How to live a good life, love our neighbours and our enemies or showing kindness to one another?

I’m very sure Jesus did not intend Christianity to be another one of the world’s bondage religions; rather he meant it to be a way of life. He came to do away with all those numerous laws which people were so occupied with that it blinded them from giving true worship to Jehovah. These laws created a great distance between mankind and its creator. They was no relationship between God and man like a loving father with his child. We didn’t even know who the Father was, so Jesus came to change all that…rebuild the CONNECTION between God and man.

Today, you find Christian leaders use religion as a weapon of oppression, bondage and brain-washing to gullible believers.

I’ve always refrained myself when it comes to talking about homosexuality and lesbianism. This is mainly because whatever I say may be misconstrued and in the end it may kill the good intentions I had in expressing my views in the first place.

My best illustration to use in the matter of killing or burning gays alive would be the story of the adulterous woman who was brought to Jesus because she was about to be stoned to death. Jesus didn’t let the crowd stone her. He saved her life BUT He told her not to sin any more. This meant he loved the woman but hated the sin.

If we are TRUE Christians, we should love the sinner but hate the sin…just like Jesus did. It doesn’t matter to me if Jesus was white or black. I do not need to paint an image of a black Jesus with afro hair to prove that I’m proudly African. I also do not need to go back to my ancestors religions where they sacrificed to water spirits, spirits of the forest or spirits of the hills and caves for the world to believe that I’m proud of my ancestry.

I believe in the power of the HOLY GHOST and in the worship of Jehovah as the one true and Almighty God who sent His son, Jesus Christ to save the world. So far, this God has not disappointed me and I plan to love and worship Him for as long as I live.

We were created as gods with a bold and sound mind. When you search for wisdom, you’ll find it. Then it’ll be impossible for your fellow man to brain-wash you. Shallom!