Living In Nyanya Labour Camp, One Of Abuja’s Filthiest Slums – Is Government To Blame? [READ MY DEEVANALYSIS] 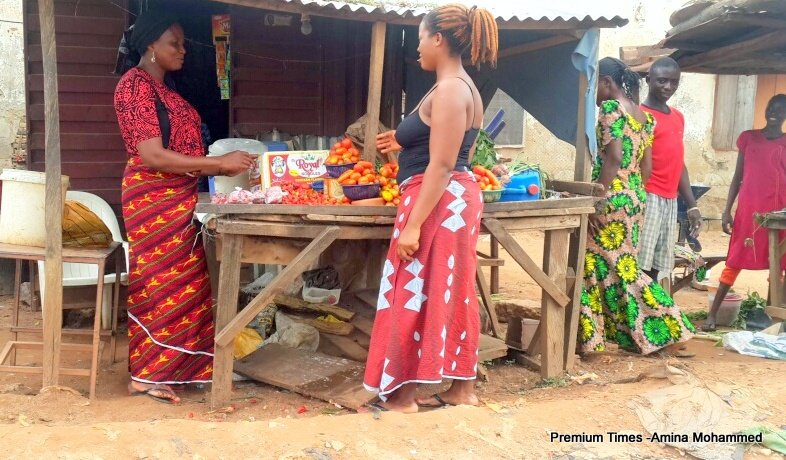 This story was reported on PREMIUM TIMES last month. I thought to share my thoughts on it…

On a recent Sunday afternoon, Gloria Akan walks out of a small cubicle behind her house where she had answered the nature’s call.

At the Nyanya labour camp, one of Abuja’s poorest slums, where she lives, Mrs. Akan and her family have used the latrine inside the cubicle for the last two years. Yet, she dreads the thought of returning there each time she is pressed.

Her greatest worry, however, is that her family shares the little latrine and a bathroom with five other families. Due to overuse, the toilet facilities have broken down, with coloured stinking water dripping from one of the pipes inches away from her bedroom window.

The Akans are only one among hundreds who live under terrible conditions at the Nyanya Labour Camp, a 20-minute drive from the Abuja city centre.

The camp was originally built by the Federal Government over 30 years ago to accommodate the labourers who built the Abuja city.

The houses were designed for one occupant per room, with the rooms facing each other. The rooms are built in clusters of five in a section for the lowest class and six-room-in-a-row blocks of one bedroom flats for others.

After the labourers left, the Abuja administration transferred the houses to civil servants and low ranking police officers.

In 2006, the government began selling the rooms to mostly the lowest ranking civil servants as well as junior police officers. Unoccupied rooms were taken up by squatters. Soon, the camp became a full-blown slum.

Several residents have built extra rooms to the houses, some adding toilets within their rooms. The camp is overcrowded. The access roads are terrible, ridden with pot-holes with sewage from burst sewage pipes crisscrossing the camp.

Occupants narrated the experiences of living here for years.

Mrs. Akan said she treats her kids for malaria and typhoid fever nearly every month, because the shop where she sells vegetables and fruits sits at the edge of an open drainage conveying sewage. The pipes that take the waste from the toilet to the soak-away are broken, likewise the soak-away itself.  Her children play around the gutter as she trades.

Most residents of the camp admitted they settled there because they could not afford a decent home elsewhere.

In 2006, the United Nations Habitat declared the camp unfit for human habitation. The Nigerian government responded to the verdict by announcing a plan to relocate the residents of the labour camp.

The government has named the 152-hectare Gidan Daya site in Kurudu, Kurudu District, Abuja Municipal Area Council, AMAC, as a possible relocation site. The new site may be completed in three years. It is expected to contain 8,064 flats.  N14.07 billion has been approved towards developing the site.

The Minister Of State for the Federal Capital Territory, Olajumoke Akinjide, said the new camp would include good roads, electricity, water supply, and a drainage system. She added that support facilities planned for the site would include schools, markets, a police station, primary healthcare facilities, a fire station and every other thing lacking in the current camp.

Residents of the camp however, view the relocation with mixed feelings. While some residents look forward to better accommodation, many others view the relocation as an eviction plan with a goal of selling the camp’s land to some of Abuja’s deep pockets.

Most male residents, preferred that the government developed the slum rather than relocate its occupants entirely.

See photos from the slum, then scroll down to read my Deevanalysis… 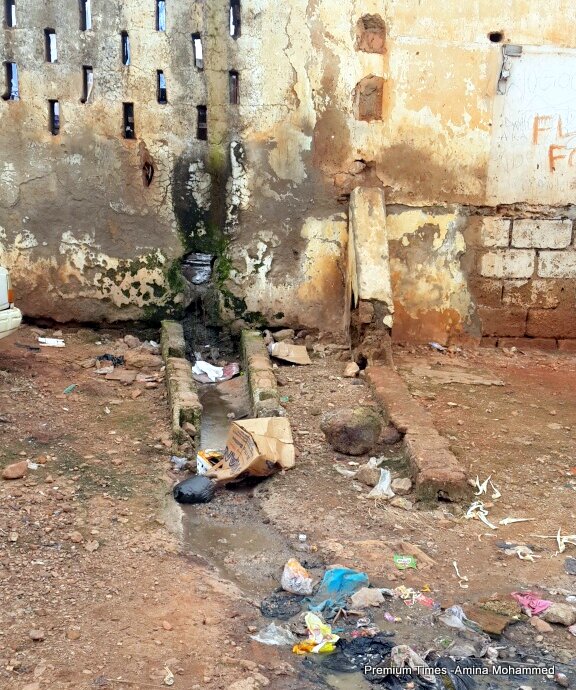 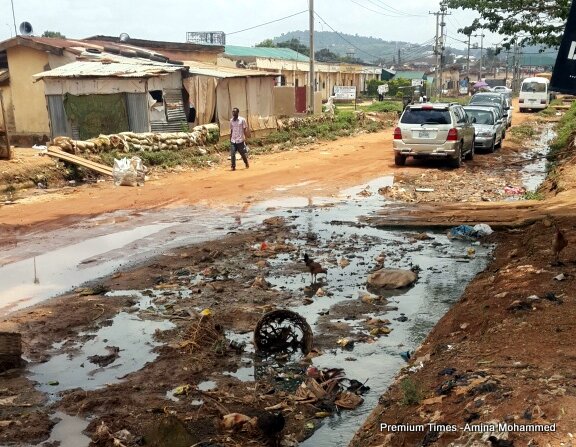 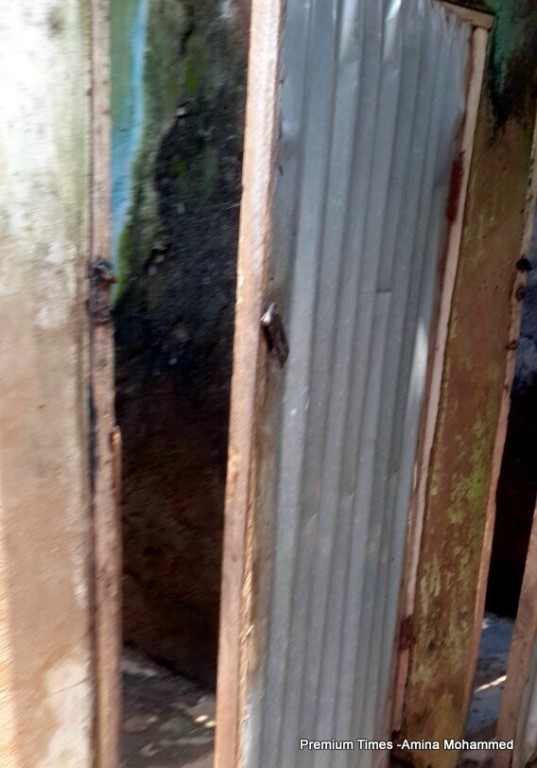 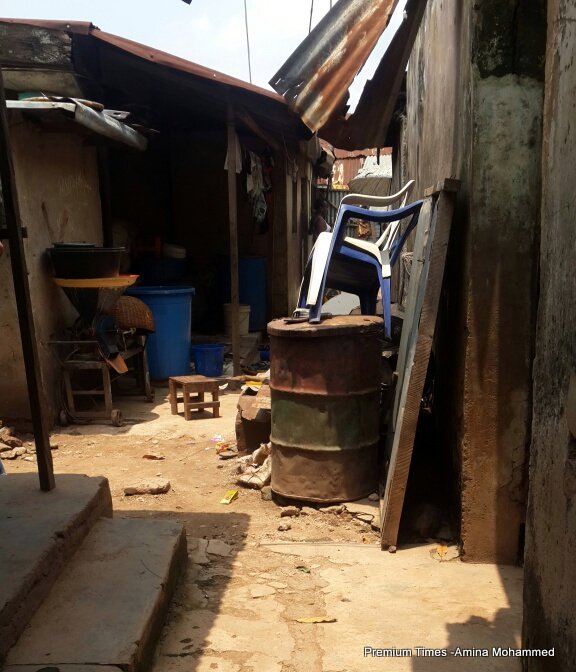 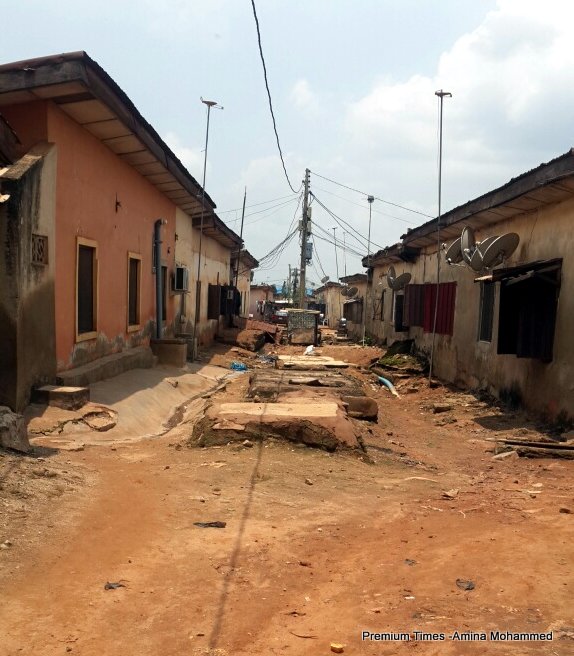 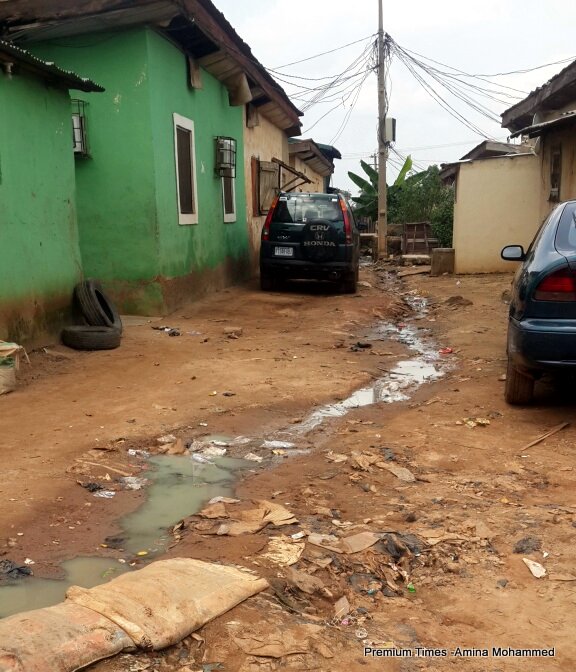 When I read this story back in August, I was very moved by the plight of the residents. Although my blog was experiencing some technical difficulties at the time, I vowed to carry this story no matter what.

As always with the typical Naija syndrome, I was about to blame the government, when something caught my eye. Study the photos below carefully. You’ll see a Honda CRV SUV parked by the side of a house and a nice-looking saloon car parked behind it. In another photo, you’ll about five vehicles parked in a row on a dirty street. The vehicle in from is a nice-looking jeep and the one farther ahead looks like a coaster bus. One other photo shows a display of satellite dishes…four clustered together, two more in front of it and another two farther ahead.

My verdict? These residents are not as wretched as they want to make us believe.

Let me just say this. The average Nigerian is not lazy but he loves to cut corners. Many of these residents can afford better accomodation but prefer to stay in such pitiable conditions because they are getting this dilapidated infrastructure for next to nothing. Now this is  totally their choice which I’m not about to judge them for. But let’s reason…

Do we still have environmental sanitation in Nigeria? Do residents implement this exercise? Look at the last photo above. There are two used tyres leaning on the wall. We have been admonished through health campaigns not to leave things like that lying around because they withhold stagnant water from the rains which breeds mosquitoes. Stagnant water can be seen in almost all the photos. Little wonder Mrs. Akan treats her children for malaria and typhoid every month. It IS NOT the job of government to clean your surroundings for you. No matter the quality of infrastructure government plans to set up, if residents lack good hygiene, their health will continue to be endangered.

This is what I suggest:

Nigerians, please government cannot do everything for you. There is much dignity in developing ideas and strategies that will better your community before help comes. If such conscious effort is made, and you write to appeal to the your local government council for assistance; stating what you’ve started so far on your own to bring positive change to your various communities, I bet government will be motivated to key into your vision.

In place of the rotten waste lying around the street, plant flowers, fruit trees and ornamental trees. Clear unused land and grow vegetables on them. De-junk your house and surroundings. Throw away things you haven’t used in years. If you feel there still have some value, organize a neighbourhood yard sale or better still give them out to charity.

Wouldn’t it be nice to park your nice-looking cars beside flower gardens? Or have the scent of fresh flowers caress your nostrils instead of the stench of stinking drainage?