She was buried at Houston Memorial Garden City on Saturday May 3, 2014. Dr Isioma Awele Ebegbodi nee Unokanjo was a mother of three…a boy and two girls. She was also a medical resident physician at Marshfield Clinic in Texas.

She was shot dead around 3.am on that fateful day after she got into a fight with Martin; her husband and the father of her children.

After he shot her, Martin went to a neighbour’s house and confessed his crime…asking the neighbour to call the police. The Harris County Sheriff’s department arrived at the house in the 19700 block of Youpon Leaf Way and arrested Ebegbodi. He was charged for murder and thrown in jail.

When this story first broke, I was sad no doubt but I didn’t share her story immediately because the spate of domestic violence amongst Nigerians; even those in Diaspora was becoming sickening to say the least  and I was becoming tired of telling and retelling this tale of woe.

As soon as news of Isioma’s death broke, a Facebook post by her friend was shared on my timeline… 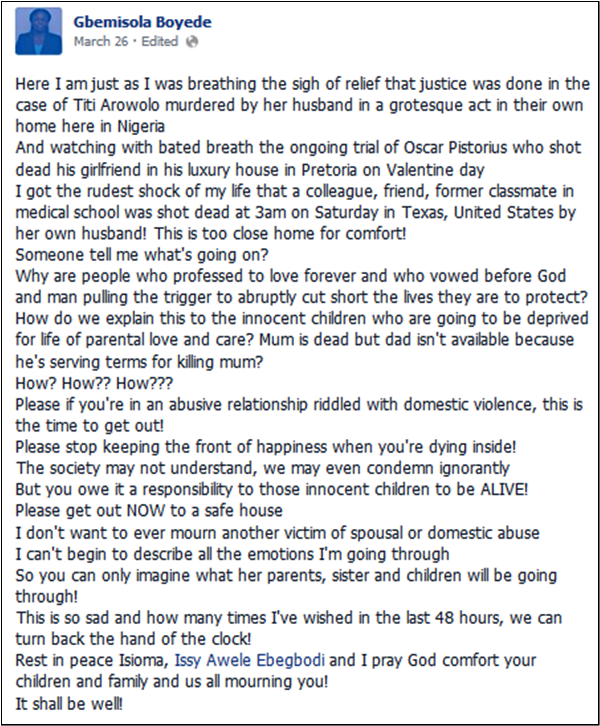 What Isioma’s former classmate, Gbemisola Boyede said in that post pretty much sums up my analysis or what I ever had to say. When things like these happen, it’s really difficult to make sense of it talk less of analysing it. The reason is we aren’t privy to everything which happens in a couples’ marriage. So the analysis would be somewhat partial.

In Isioma’s case, I’m compelled to do a complete deevanalysis on her story because her OBITUARY caught my eye. Take a look at it…

Have you ever seen such an obituary before? Very deep! If you look at the the funeral pictures, you’ll see the children (top left). They attended the funeral. They heard everything said there. They are now staying with family members because their mother is dead, their father was charged with the murder and has been sent to prison. While staying with those relatives, they hear more and they’ll be scarred for life.

At school, fingers will point at them…there’ll be small gossip here and there. Trust American kids, the mean ones may even call them freaks. God help Isioma’s son if he falls in love with a Nigerian girl. Her father will tell her:

“You want to marry that boy whose father shot his mother in her sleep eh? So you want to die like his mother abi? Please my daughter, go and find yourself another husband!”

This is the kind of stigma every couple should try to avoid when you get into a fight. What names and reputations are we building for our children? Why does it always have to be about a man, his ego and his pride. Does an abusive man ever stop to think that his actions could negatively affect his children, relatives, friends and even his country? Isioma made the headlines as “Nigerian Woman”, right? And it caught our attention. I’ve said it many times, it’s better for a woman to leave a marriage alive and in one piece; than to stay there, dead.

I’m sure this is also screaming in your head as it did mine: Why, why why????? Why did Martin do it? It was reported that he constantly complained that his wife always disrespected him. That once, he even reported Isioma to the police about her insolence. So this time, after killing his wife, Martin Ebegbodi went to a neighbour’s house and asked him to call the police who arrived and arrested him. One could argue:

“Why did she marry such an old man…a man twice her age?”

I’ve also seen women who marry men twice their age and living a fairy tale marriage. Reason is, a man at that age has most likely stopped playing the field. All he wants is to chill in the company of his young wife. Because he has seen ‘life’ and is done with youthful exuberance, his approach to marriage is more solid and mature. He assumes a fatherly/husbandly role; and if he’s rich the young wife is sure to be spoilt silly with goodies. So it’s really not a matter of the age difference.

It’s a matter of a woman and even a man KNOWING whom you married. If you’re married, take a good look at your spouse. What would be his/her anger limit? If pushed to the wall, can he/she kill you? Truly they are many gory stories of people being murdered by their spouses…by poisoning, butchering or fatally shooting then. Before you get married to anyone, try very hard to know who that person is.

It isn’t just enough to publish stories like these just to disseminate information. We must also sound a very shrill note of warning to others along with it. It’s high time we stopped sleeping with the enemy. 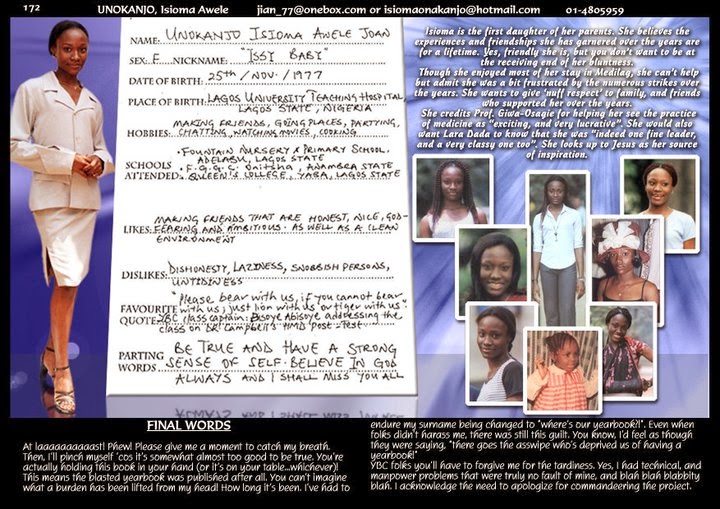 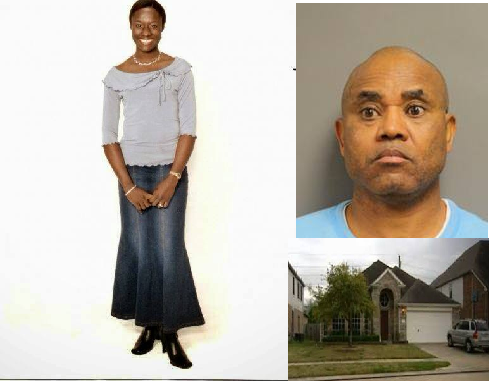 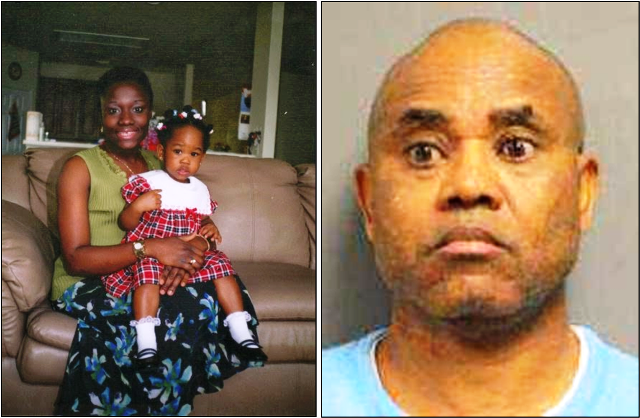 Isioma with her youngest child (left) and Martin (right)