What Did The Nigerian SSS Do To @Ciaxon…What Can We Deduce From His Cryptic Tweets?

We are certainly living in perilous times in our great nation, Nigeria. Recently I reported that a young man, Yusuf Onimisi, who goes by the name @Ciaxon on Twitter was arrested by the Nigerian State Security Service. (If you missed that gist, click HERE to read it.)

With this strange behaviour, Japheth Omojuwa a renowned activist and campaigner for positive change in our country was forced to send out these tweets…

It was after these tweets that Ciaxon broke his silence and tweeted:

“My freedom matters, whatever happen in there end in there,” he said. That statement is pregnant with ambiguity.  Does it mean that the SSS bullied him to silence? Like Omojuwa said, is it possible that Ciaxon’s civilian eyes saw too much for his own good? Now, we may never know. 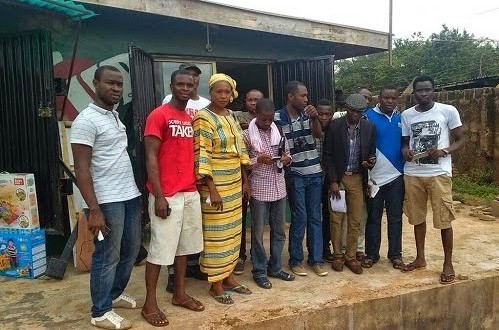 Kemi Omololu Olunloyo with some #FreeCiaxon protesters in Ibadan

Meanwhile, on April 12 2014, Kemi Omololu Olunloyo, a Nigerian journalist and daughter of a former governor of Oyo state was part of the #FreeCiaxon protest in Ibadan. There were insinuations from some of the protesters that Kemi initially claimed she was the leader of the protesting group only to back down and deny them when the SSS suspected they may be Boko Haram Members. One Chinasa Ikelu wrote this about her:

“Kemi Oluloyo denied leading the protest. She claimed to be a media officer who covered the protest. I was in shock. I saw first hand hypocrisy displayed. We all looked at ourselves again but remained silent due to the fact we all came for one struggle. Meanwhile, Kemi and SagaySagay were in a different room but we didn’t know what was going on in there. We all got out and Kemi Oluloyo became loquacious as usual.”

Jonah Ayodele Obajeun, a blogger who uses the Twitter handle, @Obajeun gave an eyewitness account of what happened in Ibadan that day. Here are excerpts of his story as published on Omojuwa.com:

“The movement gathered storms at Mokola Round-About in Ibadan, and we moved to the DSS office at Alesinloye, having been trailed by some men of the SSS. We knew and we were expecting them. Just before we left Mokola, one woman, not known by me joined us. She obviously had a loud voice. I have never met her, seen her before, but I have read some gossips about her. “I am Kemi Olunloyo, daughter of a former governor of Oyo state. I am an activist.” She announced in high pitch. She introduced herself to the people on the streets, how she spent 37 years in Canada doing activism.

At the DSS office, we were stopped, surrounded by vans and armed men. “Who is the leader of this group?” One senior DSS officer screamed at us. We were all speaking with our protesting energy, with Kemi Olunloye filming with her phone and saying she was leading the group until the discussion got to another level. “You are members of Boko Haram, just tell us who you are.” The DSS Senior Officer screamed again while dragging our placards with us until I signaled to the other guys to peacefully release their placards.

“I am not a part of the protest; they just invited me to cover the protest as a journalist. I am Kemi Olunloyo, daughter of a former governor and a close friend of the former head of SSS in Abuja.” We were denied at the most crucial time. My camera was forcefully removed from my neck by another officer, my sun shade broke in the process and we were marched down to the inner receiving room, having been dispossessed of our gadgets. Kemi Olunloyo and one Sagay Agbalaya went into another room on the invitation of the head of the DSS Office, Mr Ndubisi. We were called one after the other to open up our phones, write down our emails and passwords including our twitter handles and passwords. After about 4hours, we were told to go on the directive of Mr Ndubisi.

Some of the DSS officers tagged one of us as a terrorist when he refused to reveal his passwords. This was Chinasa Ikelu, who was obviously angry that the daughter of the former governor denied being part of the protest just few minutes after she finished filming where she said she was leading the group before her phone was taken away from her. I kept cooling his frayed nerves all through. But truly, something is wrong here, the denial. Chinasa Ikelu went on to tweet about the denial and Madam Kemi Olunloyo took it as a validation of the terrorist trait in Chinasa Ikelu as posted on her blog.” 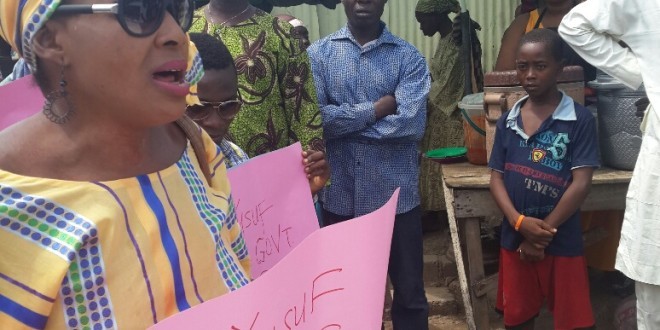 After much bashing from Nigerians on social media calling her names like “Judas” and “Traitor”, an angered Kemi took to her blog to say she’ll never partake in any protest on Nigerian soil again. In an article which she titled, “UPDATE on WHY I will never ATTEND another PROTEST on Nigerian Soil-Kemi Omololu-Olunloyo #FreeCiaxon”, Kemi gave a most shocking account of what went on in the SSS Ibadan office on that day. Find her tweets and videos below…

In my own opinion, Kemi’s account and videos gives me a clearer picture of what might have happened and the whole mentality of Nigerian security toward terrorism.

You could see from the first video that an official forcefully snatched the placards from the hands of the protesters; an act which to me was totally unnecessary since the protest was peaceful. There were indications that the protesters may have been harassed by SSS officials judging from the harsh way they spoke and acted.

It is a fact that most of the protesters did not know each other in person except on social media. Therefore, I agree with Kemi on being careful about who exactly was standing beside her in the name of joining a protest. Also, some of the security briefing she shared in her tweets were on point. Ciaxon in truth, by tweeting photos of a jail break put Nigerian security at risk. Therefore, It was standard procedure to detain him until every doubt was cleared that he wasn’t a terrorist.

Right now, Yusuf Onimisi is really lying low. He no longer uses the Twitter account, @ciaxon. If you click on his Twitter handle, it takes you straight to a parody account. He’s laying low to protect his family from more trouble. I don’t think the SSS was very happy Ciaxon tweeted that they were disarmed by terrorists and would have had their asses fried if the army hadn’t arrived in time to save them. I really had a good laugh over that one and that was to me, the highpoint of the Ciaxon drama. Ciaxon would have earned himself some roughing up while in detention. I wish Yusuf the best of luck in all his endeavours.

While it may be true that Nigerians may sometimes fight for a cause that is causeless. One thing is sure. The social media has come to stay and young Nigerians will use it as a powerful weapon to fight against injustice. Now that we’ve discovered the power in the social media. Let’s not be distracted by Babelic fighting and calling each other names.

Let’s move on to fight more sensible wars. The whole world is waiting and watching for us to redeem our beloved country.

Will Kemi Omololu-Olunloyo Ever End Her Beef With Linda Ikeji? [My #Deevanalysis]