Who Says Amber Rose Has Class And Ini Edo Doesn’t???

I read a particular blogpost on Linda Ikeji’s blog, yesterday with intense indignation. The blogpost in question was a story about Marie Miller winning the Miss Earth beauty pageant and the panel of judges who sat at the table.

In the photo above, you can see Hollywood actor, Boris Kodjoe in a dapper suit; Model, Amber Rose (in short blonde hair) and Nollywood actress, Ini Edo. Linda made a particular remark about Amber and Ini and I quote her:

“It was strange how Ini and Amber never exchanged words through out the event despite sitting next to each other.”

Her readers swallowed up this remark and had a field day calling Ini all sorts of names; from mgbeke, to someone suffering from inferiority complex. One commenter on the blog even said:

“Ini na f**k up girl nau or na inferiority complex dey worry am. I’m quite sure Amber never heard of Ini before but Ini sure knows who Amber is and instead make she famz with her she siddon there like gorimapa. That na why i love Omotola she no dey dull………”

Nollywood actress, Genevieve Nnaji was originally billed to be one of the judges. Since Genny is still on vacation abroad, the organizers of the pageant then made Ini take her place. So the commenters had a field day comparing Ini to Genevieve… how Ini is trashy and Genny has class.

Yes, comments make a blog lively and interesting; but when 90% of the comments generate so much hate that a blog becomes saturated with massive negative energy, then that blogger…no matter his/her religion or creed needs to do a reality check. Any criticism which deviates from the constructive and edges toward the destructive shouldn’t be encouraged by any sane person.

Of course, half of the commenters on Linda’s blog are chronic nincompoops…with a colonial-slave mentality. Nothing that could progress our socio-cultural environment can ever come out of their mouths. So I can never expect too much from them but let me make this very clear:

Anyone who feels anything; whether trashy or classy…so far it comes from America is better than what comes out from Nigeria is suffering from a chronic case of COLONIAL-SLAVE MENTALITY!!

1. Every polished female celebrity you see all over the world today, was once an “mgbeke.” Over time, with success in their careers, opportunities and money pouring in, they all clean up nicely.

Who remembers American actress, Halle Berry in her Jungle Fever and Boomerang days? Who would’ve thought she’d go on to be not only an Oscar-winning actress but one of the world’s most glamorous women. What about Angela Bassett in Boys in the Hood? Doesn’t she look much more fabulous today?

Even Genevieve Nnaji sef, I remember when she used to get it all wrong in the style department. Then she became the Face of Lux…and everything changed! I don’t know if Lux sent Genny to some sort of finishing school, because this deeva returned fiercer with an energy swallowing up everything that comes her way with class. That is what I mean by OPPORTUNITY. Lux was Genny’s ‘Opportunity.’

2. Remember the comment above, that idiot made about Ini “famzing” with Amber? Why?? Because Amber is ‘oyinbo’? It had better be that the commenter meant famzing for business connections or else…but it didn’t come off that way.

Now, I have nothing against Amber Rose, but if you ask me, I’d tell you she has no class. Any woman who wears grill in her teeth with tattoos covering half of her body and wearing a T-shirt with the caption ‘Pure Hell’ has no class…and please don’t call it an American thing. It’s totally a class thing based on the matter I’m handling here.

I’ve put Amber and Ini, side by side. Please where’s the great difference? If some bunch of hungry people who call themselves stylists were not on rampage in Nigeria, our celebs would have been better styled. Then they’d be able to give any celeb in any part of the world a good run for their money!

But we embrace mediocrity in our country. One person go just chop akpu and draw soup finish, come claim say e be stylist, then our celebs would swallow their ‘wash’ hook, line and sinker. This has to stop!!

AND THE HATE CONTINUES…

Later that day, blogger Linda Ikeji did post another photo of Amber and Ini together…so they did “famz” after all?? Then the drama shifted again to Ini’s $10,000 red lego Chanel handbag.

It so happens that Genevieve Nnaji has the exact same (make I form Americana small) bag. Commenters ate Ini up! They said the bag was fake, she couldn’t afford it, she borrowed the bag from Genny to pose…hian!!

LEAVE INI ALONE!! STOP CRITICISING WITH SO MUCH HATE and BLOGGERS STOP PROMOTING HATE ON YOUR BLOG. 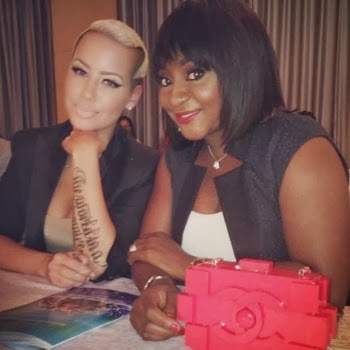 Will Kemi Omololu-Olunloyo Ever End Her Beef With Linda Ikeji? [My #Deevanalysis]

Linda Ikeji Finally Does Right By Kendra Etufunwa [MY DEEVANALYSIS]

1 thought on “Who Says Amber Rose Has Class And Ini Edo Doesn’t???”